How time has flown!  It only seems like yesterday that we were celebrating the first anniversary of YPAG KSS and now a year on and with more research projects under our belts, 13 children and young people, 8 parents and carers and 6 YPAG facilitators gathered together on February 1st 2020 to celebrate another successful year and the second anniversary of YPAG KSS!

Arts Facilitator Tom Goulden from Priority 1-54, was invited back by popular demand to help us reflect on our accomplishments and, using creative graffiti art techniques, to capture what we have enjoyed about YPAG and what being part of the group has meant to us.  Everyone, children and young people and adults alike took the opportunity to get creative and take part.

Prof Paul Seddon reminded us of the array of different projects that have received various input from YPAG in the past twelve months.  These have included projects focusing on a range of health issues including autism; helping reduce anxiety for parents of children with long-term health conditions; several asthma related studies; looking at the well-being of looked-after children and also sports injury in young football players (to highlight a few).

A summary of projects that have presented to YPAG in the past year: 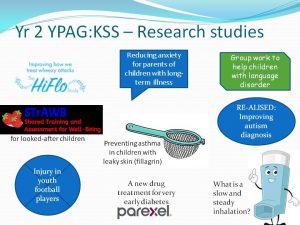 Other YPAG Activities in the past year 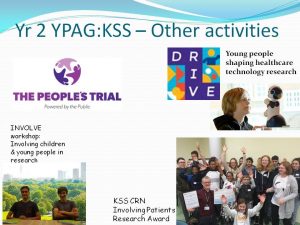 For more details on the activities see: https://generationr.org.uk/ypag/kent-surrey-sussex/

Tom encouraged everyone to think about key words that captured our experiences of being part of YPAG and what YPAG means to us, firstly on post-it notes before he helped us to transform these ideas and capture them on colourful graffiti boards. Inspired we worked on our tables and let our creativity flow.  The results were truly eye-catching and inspiring.  Key themes that emerged from the children and young people’s reflections on what YPAG means to them included: ‘friendship’; ‘collaboration’; ‘respect’; ‘fun’ and ‘support’ and that many have enjoyed the opportunities to collaborate as a group in helping others who will hopefully benefit from the research. 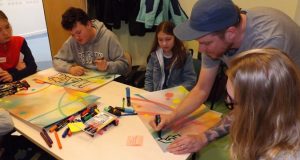 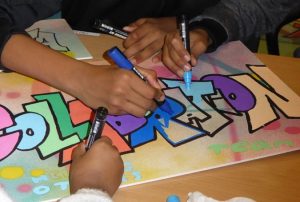 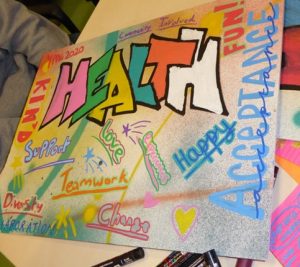 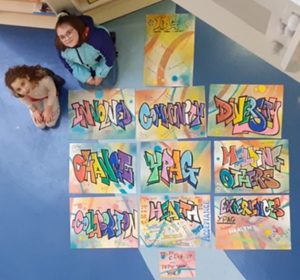 As usual, the Parents and Carers moved to a separate meeting room and were joined later by Tom who led them through capturing their reflections using graffiti art.  The reflections of the parents and carers included that they felt ‘proud’ of their child/young person’s contributions to the different research projects throughout the last year and that they had all felt ‘empowered’ by the opportunities YPAG had offered them.

The Parent and Carer Group getting creative 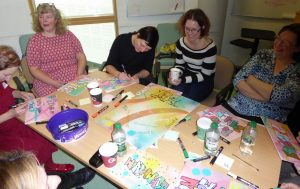 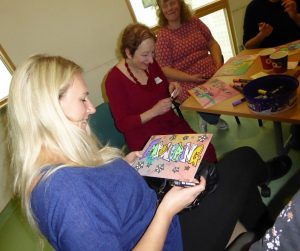 The event also included the much anticipated YPAG refreshment break with celebratory cakes (and twinkly, non-flammable, candles).  Paul Seddon performed the 2nd Year Anniversary Cake-Cutting Ceremony, and we were also delighted to be able to celebrate Robyn’s 10th Birthday – she was invited to cut her own birthday cake before sharing with the group. 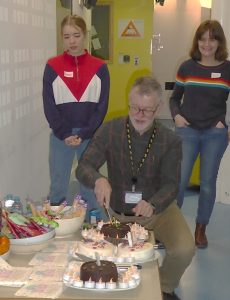 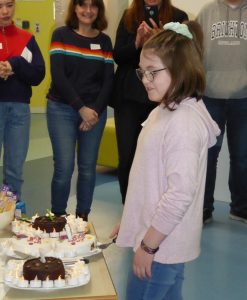 We also had the opportunity to create our own graffiti name boards, which Tom patiently helped us with.  It was lovely that both Alexis and Thomas made name boards for their younger sisters. 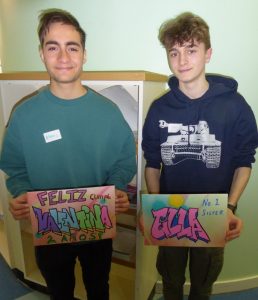 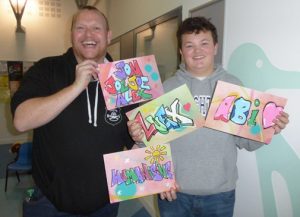 It was a very full, creative and inspiring morning that flew by.  Before the end of the session, children and young people were each given their special ‘Cathy Olden Certificate of Appreciation’ to both acknowledge the contributions of everyone in the past year and also in memory of our much missed colleague and friend Cathy Olden who was instrumental in establishing YPAG, who sadly passed away last year.

Graffiti boards and much deserved ‘Cathy Olden Certificates of Appreciation 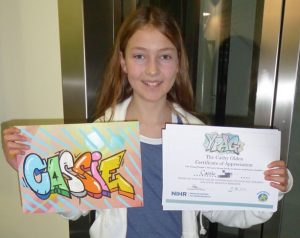 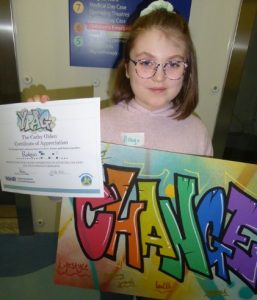 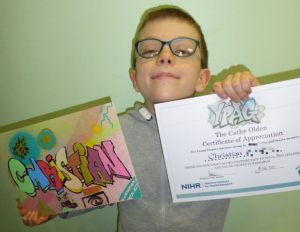 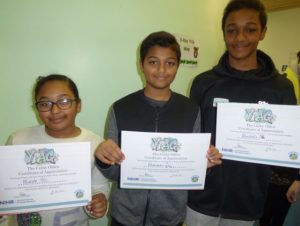 “The reason that I really enjoyed the second anniversary celebration for ypag, was because we could celebrate all of the amazing work that we had achieved through the year and display that as artwork and graffiti.

I specifically enjoyed the way that we could decide which projects we felt closely with, and use words that we thought related to that for our graffiti, for example – the word I chose was change, because of how I feel ypag really does make a difference.

I felt that I have really enjoyed the asthma related projects that we have been involved with, because of personal experience, and I really got to talk about how I felt with those projects and tell people why I enjoyed them so much.

It was really sweet, because it had been my birthday recently, and they had bought me a birthday cake!!!

“The YPAG has fast become an invaluable resource for researchers and health professionals in our region. I have the pleasure of not just facilitating the groups but benefiting as a researcher from the experience of children, young people and their parents. The advice and guidance from the groups received on grant applications I am involved in have resulted in two funded applications (NIHR RfPB and Diabetes UK), both of which were undoubtedly strengthened by the YPAG.”

“It’s always such a privilege to celebrate with the YPAG group and reflect on all their annual achievements.  Celebrating the diverse projects they have been involved with and honouring their ongoing commitment and confidence is both humbling and inspiring in equal measure.”

“It feels like a huge milestone for the group to be here and thriving after 2 years, and it was good to pause to look back on what we have achieved. It is a tribute to the hard work of the young people, parents and carers, and the facilitators that YPAG KSS is now an institution valued and sought out by researchers. Our young people should be very proud that they have played a vital role in improving research into children’s health in our region”

Thanks to all the YPAG helpers who make the Saturday meetings possible and to the researchers who come to present their research ideas.

For the second time we met at the Children’s Eye Centre at Moorfields. We had the whole second floor to ourselves. There were three sessions. Sofie Layton, our resident artist, gave a presentation with all the logo designs that we had developed at the last meeting. Some were in colour, other in black and white. […]