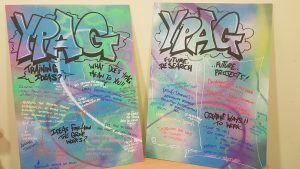 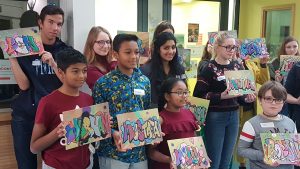 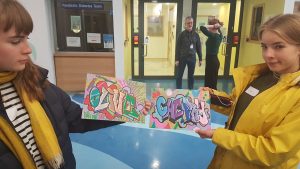 This was a great day!  It was the celebration of a year since the inaugural session of YPAG in November 2017. The greatest number of young people ever attended the celebration – 20 – including five new young people.  Welcome!   And more Parents and Carers too – now about a dozen.

Professor Paul Seddon introduced Alexis who had attended the International Children’s Advisory Network (iCAN) five-day event which he attended in Edinburgh along with his father Hector.   They gave an enthusiastic explanation of all the wonderful talks and workshops they had attended, and the profound effect it had had on them seeing young people who had overcome severe disabilities, in one case in order to achieve PhD status.

A YouTube video of the iCAN conference can be viewed at: https://www.youtube.com/watch?v=kVABrvjTQrg&feature=youtu.be

This was followed by an update from young people Vindhya and Hattie on the panel discussion they had taken part in following the specially screened film showing as part of the Brighton Science Festival in October of ‘People are Messy’ about the need for patient and public involvement in health research.  It and the panel, which also included Duncan Barron, Dr Khalid Ali and Jennifer Parry really brought home how essential PPI is to research.

Duncan Barron, (Research Design Service & YPAG Facilitator), was pleased to be able to tell the group that he and Victoria Hamer (YPAG Lay Member) had co-presented a talk about the achievements and impact of the Kent, Surrey & Sussex YPAG at the International Perspectives on Evaluation of Patient & Public Involvement in Research conference in Newcastle. The presentation had been co-produced with input from Ian Brownbill, of the Parent and Carers’ group, and from Kate Sonpal, of INVOLVE.

The YPAG presentation was part of a session focusing on PPI work with children and young people (C&YP). Other talks included very inspiring presentations from several C&YP themselves.  We hope to link up with these groups in the future as they (YPAG North East and a group at Imperial) are part of Generation R.  The NE (Newcastle) group are keen visit us in the SE in the near future to share their experiences.

Then there was a brief session led by Jess Baskerville (Sussex Community Trust) to get everyone thinking about what the YPAG might mean to them. This was to help inform the creative art session that was coming up! While people were mulling this over there was the mega-celebratory CAKE session!   There were about 6 or 7 ‘Happy Birthday to YPAG’ celebratory cakes, plus a Birthday Cake to celebrate Hattie’s 16th birthday.  Duncan Barron, RDS YPAG Facilitator performed the official ‘One Year of YPAG Celebratory Cake-Cutting ceremony’, which was surrounded by twinkly (non-flammable) candles.

After this momentous celebration the Parents and Carers went to another room to hear a presentation by Dr. Romanie Hannah on ‘Understanding Pre-Hospital Management of Wheeze in 1-5 year olds.

The children and young people then had a whale of a time at the YPAG 1st Year Anniversary Celebratory Art Session facilitated by Arts Facilitator Tom Goulden (who has over 20 years’ experience working with children and young people through creative issues-based projects.) He had brought a selection of large and small art boards for use at the workshop. This would enable the young to capture all the language and words to do with Celebrating YPAG, and Research, and ideas in a graffiti-esque way.  It was hoped that this artwork could be displayed, not only at the Royal Alexandra Children’s Hospital, but at various other child-orientated centres where paediatric research is undertaken. 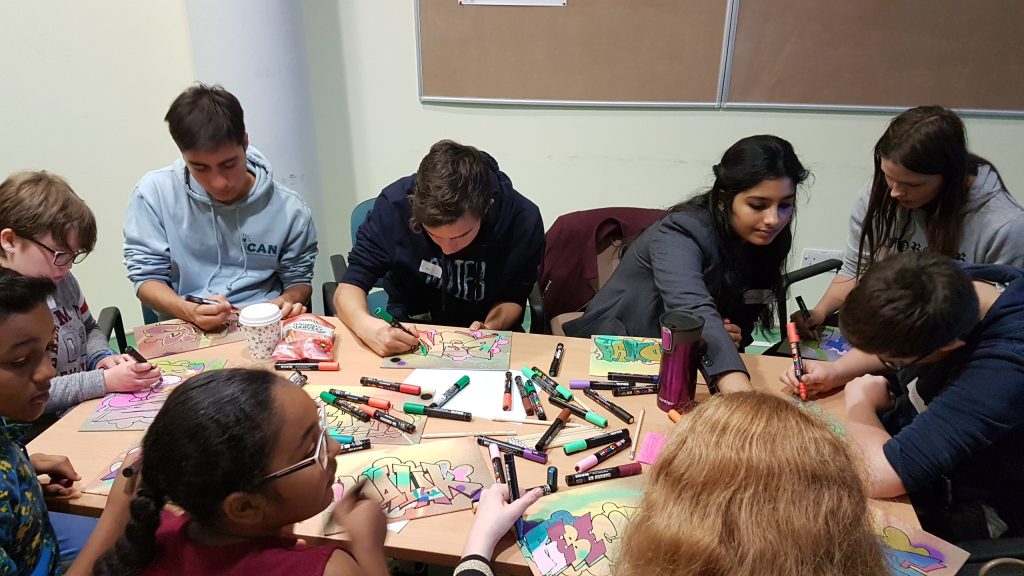 During the Art Session, you could have heard a pin drop, such was the concentration.   Tom enthused the young people by explaining various ways of achieving what they wanted to achieve. Everyone worked on a small graffiti art version of their own name using special (non-toxic) graffiti pens.  During the session Tom also encouraged the entire group to contribute to various YPAG related discussions which he then captured using graffiti art on larger boards.

For example, in response to the question Tom posed on ‘What does YPAG mean to you?’ responses included: ‘I come because I want to be a doctor’; ‘it helps me understand research more’; ‘it gives me insight and challenges me’.  Training ideas and suggestions were also captured by Tom and included: ‘first aid training’, ‘clinical trials’ and ‘ethics’ training.

The C&YPs ideas for future research were particularly exciting and included research with a focus on ‘disabilities’; ‘eating disorders’, ‘healthy eating’ and ‘tackling obesity’ ‘mental health’ and ‘more research on asthma’ (which will no doubt please Prof Paul Seddon!). The adult facilitators were also keen to hear about the C&YPs creative ideas for how to run future YPAG sessions.  These included: ‘making YouTube videos’; ‘using different art forms’ (e.g. music, song, theatre), using more mind mapping in sessions and social media.  There was also a suggestion to link YPAG with youth councils and the National Citizens Service (NCS).  Most of the YPAG helpers were not aware of these groups but Tom offered to help!  All of the amazing, creative ideas were captured on the large graffiti boards by Tom.

The parents and carers came to join the C&YP before the end of the art session so that they too could enjoy watching, before their very eyes, the artistic achievements of the young. What’s more, the young people also had the graffiti art work of their name to take home with them if they wished.

It was a very special Celebration, which the presenters, facilitators and helpers enjoyed just as much as the young.

Thank you especially to Richard Scott who photographed a running-account of the session.

Thanks to Kate Sonpal and INVOLVE who have provided on-going support and advice: http://www.invo.org.uk/

The Young People’s Advisory Group (YPAG) for Kent, Surrey & Sussex is collaboration between:

Thank you to the Rockinghorse charity for a small grant which has enabled us to provide ‘thank you’ vouchers to the C&YP for giving up their time for attending the YPAG meetings:  https://www.rockinghorse.org.uk/ 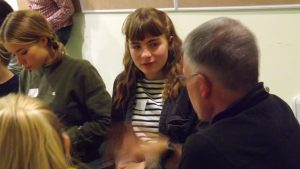 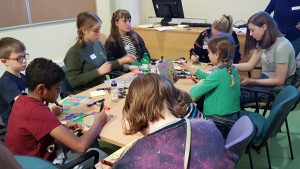 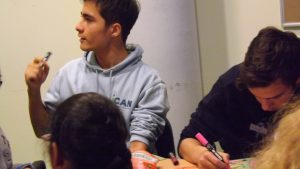 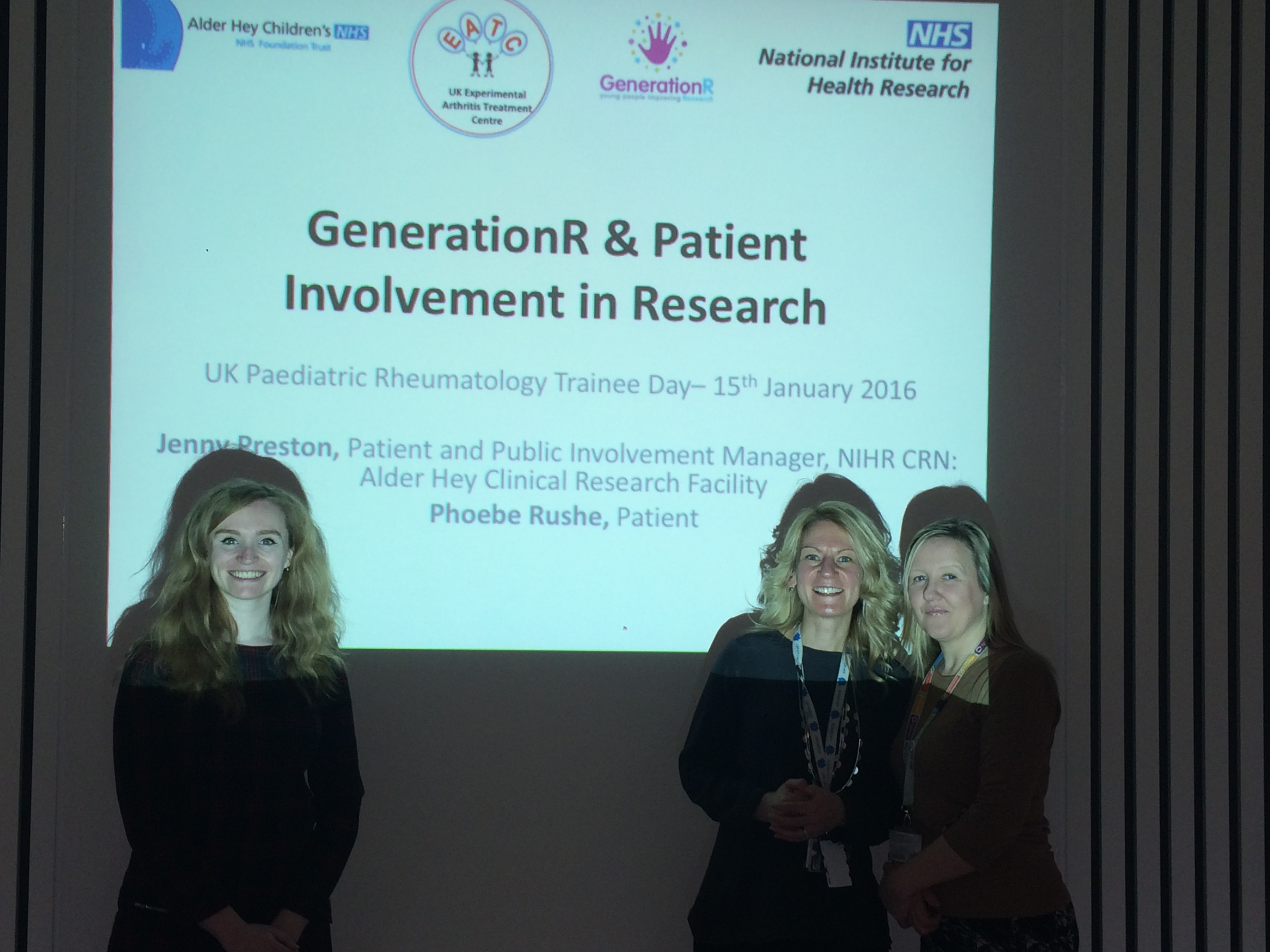 Juvenile Dermatomyositis (JDM) patient, talking about a patient’s perspective on research, the benefits of involving young people in research and how we can get more patients involved in the future. 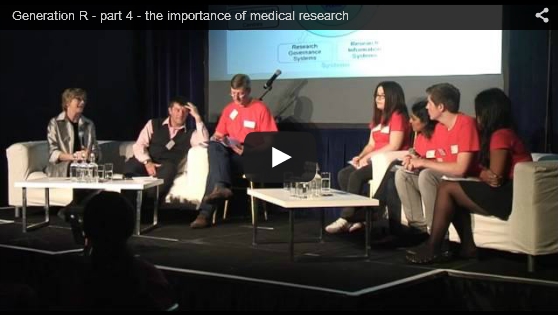