Setting up a forum for parents and carers

For many years Alder Hey hospital has been the home of the very successful GenerationR Liverpool Young Persons’ Advisory Group (YPAG).

This group of young people aged between 10 and 20 years have developed a reputation for being committed and enthusiastic in the way they have supported a wide variety paediatric research studies. They have supported the design and delivery of many clinical trials and have proved themselves to be a valuable team, providing the voice and opinions of young people in many areas of research.

Following on from the YPAG success, the NIHR Alder Hey Clinical Research Facility (CRF) Patient Involvement team (Jenny and Sammy) felt it was important to develop a forum for parents and carers to also have their voice heard, the idea for the GenerationR Parent/Carer Research Forum had begun.

Over a couple months parents and carers were recruited from all over the North West. It soon became clear that clinical research was an area that they believed to be important, and that they wanted to get involved and find out more.

A Facebook forum was set up to support the group and strengthen the outreach for members who may not always be able to attend meetings in Liverpool.

Our first meeting was held on the 17th of February at The Institute in The Park, Alder Hey Liverpool. It was attended by seven 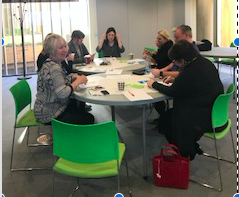 parents, with more very keen to attend our next meeting in April.

The meeting began with coffee and introductions, the group got off to a good start with people relaxing and getting to know each other.  What we felt was the most moving part of the day was how people shared their stories and experiences of having children with long term and chronic conditions.  To us this seemed to sum up perfectly why research was so essential. Without it, many children would have such a different outcome in their own stories.

So many of us are thankful to the parents and families who have previously agreed to take part in research. We couldn’t help but think, that behind every piece of research data, lies a real child and a parent, each with their own story to tell.

The parents and carers that attended all had different experiences and understanding of research. A group brainstorming activity highlighted areas that they felt to be important. It also gave the members time to ask questions and to discuss together how the group would run and the ways in which we can develop.

This led nicely on to a presentation by Jenny giving some context to the forum, a brief background about our strategy to involve young people, and how we as an organisation will support the forum in its activities.

Why not start as we mean to go on and give the Forum a flavour of what was to come by inviting two researchers who work at Alder Hey/University of Liverpool to talk about areas of work they are involved in.

Professor Calum Semple began the talks with a fascinating insight into a study concerned with changing the outcome for many young babies diagnosed with bronchiolitis, which can be a very serious disease.   Members then gave their input into the logo that is being chosen for the study, and there was an overwhelming winner (below). The  Parent and Carer Forum choice was ratified by the Trial Management Group and already appears on the study Twitter Feed @BESStudy. Please follow if you Tweet and if not perhaps you would like to try it!

“The enthusiasm of the forum to support our study is really welcome. I am looking forward to working more with the group on BESS.  Their engagement will be critically important to ensure that parent and carer facing materials are appropriate particularly given the challenging circumstance supporting recruitment of infants to a trial on the intensive care unit.”

This was then followed by a talk by Dr Dan Hawcutt (Senior Lecturer Paediatric Clinical Pharmacology, University of Liverpool) came to the group as a researcher who needs parental involvement. The study in question is designed to collect adverse drug reaction information from children and young people who use medicines at home – and one group Dan was particularly interested in is children and young people with communication difficulties. Therefore, the parents view on how a drug has affected their child is critical. Dan was interested in getting feedback on a data collection sheet- this needs to be easy enough to complete but detailed enough to get meaningful data. The parents where very helpful in shaping the format of the data collection form, providing useful insight into what they would find most important, and what details were not. They also contributed to the overall length of the form (keeping it short) so that parents in an outpatients waiting room are not overwhelmed by a massive questionnaire.

Having such a group is so helpful explains Dan:

“I am a parent and I have some understanding of the stresses and strains of managing children in and around hospital, but having a range of perspectives really enabled me to improve what I was asking of the parents, and how these data were collected, to make sure the study generates meaningful data”.

Our first meeting went incredibly fast! As we had predicted we overran as everyone had so many questions and points they wanted to bring up.

I hope that people enjoyed the day and everyone seemed to be keen to come again when we meet in April so that seems a good sign!

Already we have had interest from many other parents who are keen to join us and so this is obviously great news for the group. As we begin to plan the next forum meeting I feel excited, already new and exciting opportunities are being offered to our members. These include being able to take part in research steering groups and attend parent led conferences. I really believe that the Parent/Carers forum will have a far reaching impact, playing a valuable role in shaping clinical trials and giving a voice to parents and carers in the research community.

We hope that the Parent/Carer Forum will prove to be a great partnership between parents, carers, and research professionals, helping to make a difference for all our children.

If you are a researcher and would like to join one of our meetings, please contact us.